The purpose of the paper is to present the Patent Box, a tax instrument for creating innovative potential which is becoming increasingly popular in EU economies, and to analyze what impact a Patent Box can have on the level of innovation of a country’s economy. To achieve this objective, two research methods are used: critical analysis of the literature and quantitative research. The literature studies involved presenting the operation mechanism of Patent Boxes and justifying (based on the theory of economics) the usage of such instruments in creating the innovation potential of an economy. The quantitative research consisted in analyzing the relationship between Patent Box instruments possessed by individual EU countries within their tax systems in the years 2011–2015 and the level of innovation in these countries expressed as outcome indicators based on the number of patents. The conducted analysis allowed the author to validate the hypothesis that the Patent Box has an effect on the level of innovation in EU countries. In Polish scientific literature there are relatively few publications addressing the issue of the operating mechanisms of the Patent Box or the economic effects resulting from the application of this kind of innovative tax policy tool. Considering the importance of innovation in making economic growth processes more dynamic, there is a need to undertake further research in this scope. The conducted research facilitates exploration of both the theoretical and empirical knowledge of the issue. Its conclusions might also prove useful in the scientific debate concerning the support provided by the state to the private sector in Poland in their efforts to embark on innovative activities. 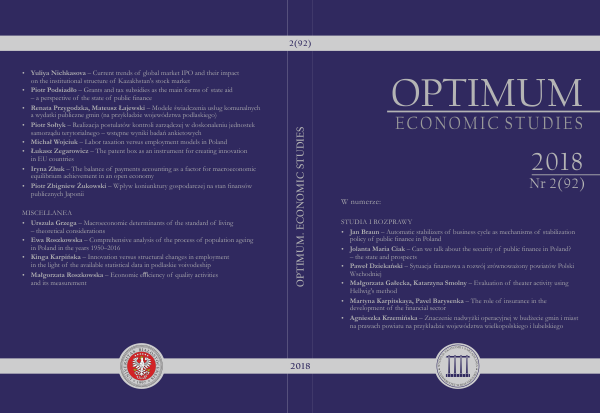